How is Sodium Cyanide Consumed during Gold Cyanidation Process? 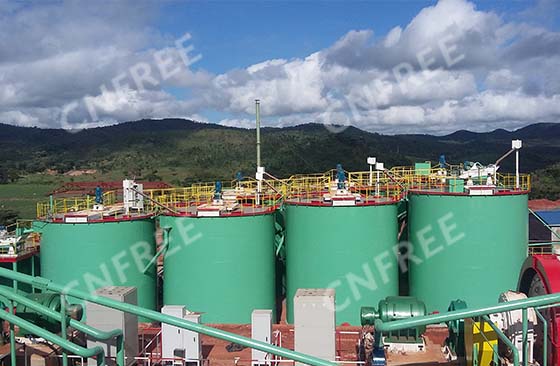 Sodium cyanide is the most commonly used leaching chemical in gold extraction process. According to theoretical calculation, leaching 1 gram of gold only requires 0.5 grams of sodium cyanide. However, in most gold cyanidation plants, the consumption of cyanide is high, which is 50-100 times higher than the theoretical calculation. So what are the main aspects of cyanide consumption in the gold cyanidation process?

From the electrochemical reaction, it can be known that dissolving 1 gram of gold consumes 0.92 grams of sodium cyanide.

2.Cyanide Consumption in Reaction with Associated Base Metals

(1) Some gold ores contain pyrite, pyrrhotite, magnetite, copper sulfide, sulfate ore, hydroxide, oxide and other associated minerals. In the crushing stage, iron powder will be produced, which will slowly react with sodium cyanide, increasing the consumption of cyanide. The reaction formula is as follows:

(2) If gold ore contains different types of copper minerals, they will all react with sodium cyanide to form copper cyanide complexes and consume cyanide. The reaction formula is as follows:

Since sodium cyanide reacts very strongly with many copper minerals, it generally need 2.3 to 3.4 grams of cyanide to dissolve 1 gram of copper.

(3) If the raw gold ore contains sphalerite and smithsonite, it will also react with sodium cyanide to form zinc cyanate and carbonate. The reaction formula is as follows:

(4) If the raw gold ore contains arsenopyrite, mercury, selenium and tellurium, they will all react with sodium cyanide. When the deposit contains carbonaceous rock, especially organic carbon, its adsorbability for sodium cyanide is stronger, making it difficult for the cyanide leaching of gold.

In solution, cyanide hydrolyzes to varying degrees with different pH. The amount of hydrocyanic acid produced by hydrolysis is related to the alkalinity of the solution. The reaction formula is as follows:

After cyanide is hydrolyzed, part will generate hydrocyanic acid, and part will be oxidized and hydrolyzed to gradually generate carbonic acid and ammonia. At 100°C, CN– loses 50%. At 130°C, it loses 85%.

In the gold cyanidation process, hydrocyanic acid is a highly toxic gas. If it is not processed, it will increase the amount of NaCN and increase the production cost, and it will pollute the environment and damage the health of the operators. But the amount of HCN produced varies with the pH of the solution. At pH 10.5, only 6.1% hydrocyanic acid will be produced. When pH 10, 17% of hydrocyanic acid will be produced. When pH 9.5, it is 39.2%. When pH 9.0, it is 67.1%. Therefore, in gold CIP plants, the pH is usually adjusted between 11 and 12 to control the hydrolysis of cyanide.

If you want to increase the dissolution rate of gold, CN – and O2 must be involved in the reaction simultaneously. The maximum solubility of oxygen at room temperature and pressure is 8.2mg/L. If strong oxidizer is added, the concentration of oxygen in the solution can be increased, thus greatly accelerating the leaching process. But the ratio of oxygen and cyanide cannot be out of balance, otherwise the leaching rate will decrease. Dissolved oxygen reacts with cyanide to form cyanate, which is very stable in alkaline solution. But at a pH less than 7, it will hydrolyze to produce ammonia and bicarbonate. The reaction formula is as follows:

Therefore, this reaction may cause cyanide consumption during the leaching process or the electrowinning process.

The iron sulfide in ore will produces ferric hydroxide during cyanidation process. The silicate of ore forms colloidal silicon oxide in an alkaline medium. They all have a certain adsorptionbility for cyanide, so that the cyanide will lost along with the leaching residue.

6.Consumption of Cyanide by Other Materials

(1) When the slurry is stirred and filled with air, the solution will contain CO2, which will also react with cyanide.

(2) Sulfide ores such as pyrite in the raw ore will react with the dissolved oxygen (O2) in the pulp, and the generated sulfite and sulfate will also react with cyanide.

Before leaching, you can add a small amount of CaO or Ca(OH)2 to neutralize the acid and prevent the above reaction.

If you have any questions about the above content, or want to know the gold cyanidation process, you can consult online customer service or submit a message, we will contact you as soon as possible!