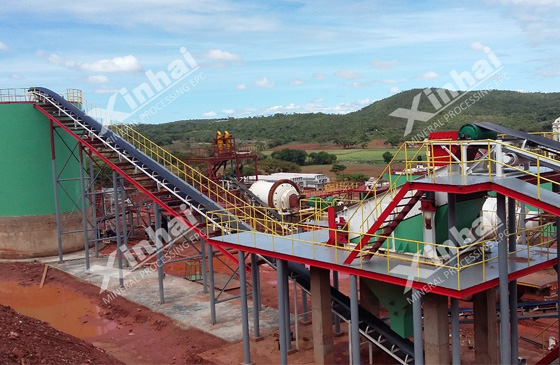 Research and production practice has proved that peroxygen reagents such as H2O2, Na2O2, CaO2, BaO2, and persulfate have obvious effects on strengthening gold leaching. This is because they can not only increase the content of dissolved oxygen in the slurry, also have the advantages of high utilization of active oxygen.

Compared with the traditional cyanidation method for gold extraction, the peroxide-assisted gold extraction process has the following characteristics and advantages:

Lead salt, mercury salt, and bismuth salt can all be used as cyanidation accelerants. These heavy metal salt accelerators accelerate the speed of gold leaching. The principle is to form a local galvanic cell between gold and heavy metals such as lead or mercury. The addition of lead salts and other accelerators to the cyanide slurry has been applied in many plants at home and abroad. For example, in some cyanide plants in Canada, by adding Pb(NO3)2 and maintaining a good concentration of dissolved oxygen in the cyanide circuit, thus overcoming the adverse effects of sulfide minerals on the cyanidation process. However, it should be pointed out that all cyanidation plants should control the amount of accelerators within a certain range according to the specific conditions of gold ore.

The use of pure oxygen leaching can reduce the consumption of cyanide (5%~85%), the main reason are:

Pressure cyanide leaching is a process in which the cyanidation process is realized in a pressure vessel, and the reaction pressure is increased to strengthen the cyanidation process. The initial research focused on the extraction of gold from refractory gold ore. When the air pressure is 2×105Pa, the dissolution rate of gold is 10-20 times that under normal pressure, realizing the so-called “flash cyanidation”. This means that the efficiency of cyanide leaching is improved.

Ultrasonic intensified leaching method (PUL) refers to the introduction of ultrasonic during the leaching process. Ultrasonic can play an enhanced leaching effect, mainly due to the formation of cavitation zone in the liquid phase under the action of specific acoustic waves, so that the pressure reaches 101.3 MPa, temperature and time change rate of 109 k / s, and accompanied by a strong impact. The local erosion, destruction or removal of the solid surface affects the leaching of the film and the passivation film generated in the chemical reaction.

The main role of ultrasound in the cyanidation process can be summarized into the following items:

The above are several methods on how to intensify the cyanide leaching effect of gold ore. Intensified gold cyanide leaching technology can effectively increase the cyano-gold reaction rate, increase the gold recovery rate and reduce the amount of sodium cyanide. For gold cyanidation, the methods used vary from one gold ore type to another. It is recommended to conduct beneficiation tests first, understand the nature and characteristics of the ore, and select the appropriate process flow with comprehensive consideration of the investment budget, in order to obtain the ideal separation index and economic benefits.

If you have other opinions or questions about intensified cyanide leaching, you can consult our online customer service or leave a message, we will contact you ASAP.